On our first day in the field we headed up to Bhimtar, a rural fishing community about 45 minutes from the main road and where we are staying.  Bhimtar was badly impacted by the earthquake, with most houses completely destroyed.  Since the earthquake occurred just before midday on a Saturday, most people were down by the nearby river and children were not in school.  All buildings in the village were destroyed, killing most livestock, but fortunately human fatalities were limited to the few people who had stayed inside.  Looking around the village it’s difficult to see where the original houses once were with rubble mostly cleared, but there is the occasional glimpse of where a wall once stood traced out on the ground.  Now, the temporary structures that people are living in are made of corrugated metal or wood and are dispersed more widely.  It’s hard to imagine living in these temporary homes for almost 2 years, but this year has seen the first wave of government funding enabling homeowners to rebuild.  With only a few months until the monsoon begins, the construction season is short, but it’s exciting to see new permanent homes starting to rise up across the village.

To meet requirements to receive a government grant after the earthquake, homeowners must meet building code, but with costs much higher than traditional rural building techniques, and the grant only covering around 50% of the cost of the new construction, rebuilding using earthquake-resistant methods is often cost-prohibitive for homeowners.  The first house we saw under construction was a confined masonry building, an innovative and more affordable design that Build Change have been instrumental in advocating and seeking approval for.

As we walked around the village, we passed many more confined-concrete buildings beginning construction, with a wide cross-section of the community working together.  Men and women, young and old, were involved sharing the heavy labour.  Concrete is mixed by hand, and in the more remote communities, cement and rebars need to be transported in by foot.  We had a go at shoveling and carting a few barrow-fulls of dirt, which left us sweating and exhausted.  Although we weren’t much help, we managed to provide some amusement to the locals, who took over our photo-op, snapping some pics on their phones and having a good laugh at us.

In the afternoon, we headed to Eklephant, where we saw a retrofitted house, along with several other neighbouring damaged homes.  The damage to the houses varied from roof collapse and more minor damage to walls to one building where an entire third of the building had been destroyed. All three homes below are planned to be retrofitted: 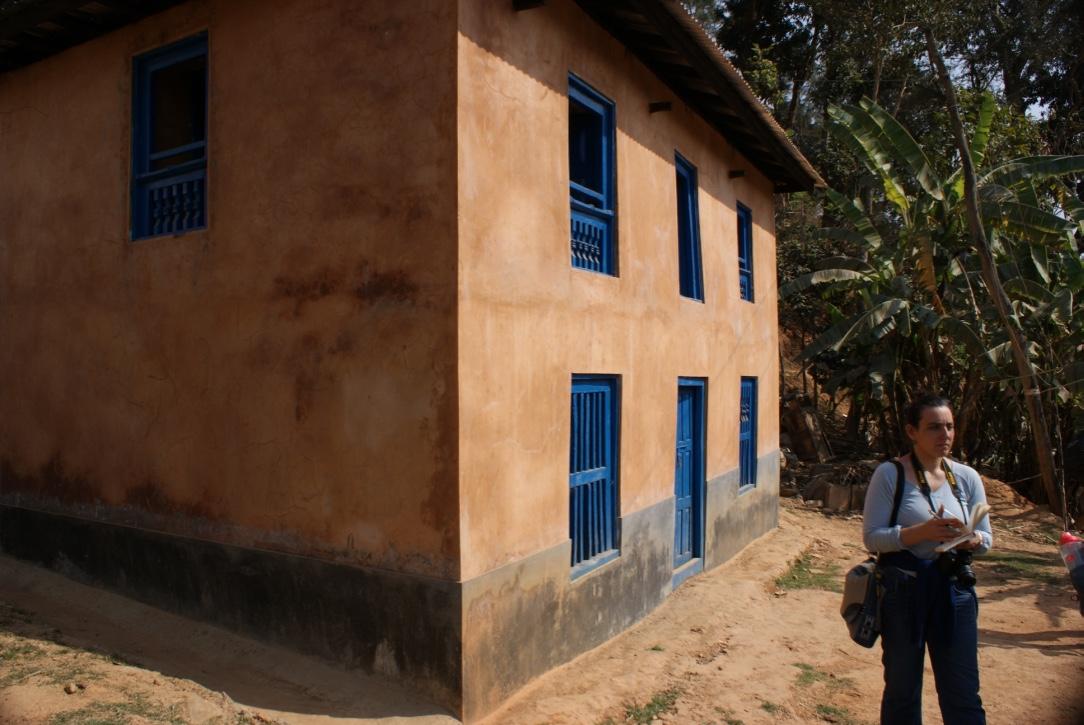 A newly retrofitted house in Eklephant

I normally think of retrofitting as a preventative measure that is used where a building is undamaged, but it was cool, if surprising, to see some of the heavily damaged buildings that could still be restored using the same techniques.  Retrofitting is typically about half the cost of building a new earthquake-resistant house, and although the government subsidy that homeowners receive is lower, the amount that they need to invest in their new home

in addition to the subsidy is much lower too.  Retrofitting has other advantages including lower environmental costs compared to a new build and allowing families to maintain a more familiar home and lifestyle (often using the ground floor for livestock and top floor as a grain store) than the new single story construction houses.  Build Change have been working hard to have the value of retrofitting recognized by the government in Nepal, and the new subsidies that are now being provided as a result will lower the financial burden of re-building an earthquake-resistant house, and allow more homeowners to go back to their homes.

Build Change’s focus is to support homeowner-driven construction, so these types of cost-effective approach are extremely important to enable these rural communities to recover.  It’s an exciting time for reconstruction in Nepal, and it will be great to see the progress that is made by the next Impact Trek!

This work may be cited as follows: The Build Change Guide to Resilient Housing: An Essential Handbook for Governments and Practitioners. Denver, CO: Build Change, 2021.

Build Change encourages dissemination of its knowledge, this work may therefore be reproduced, in whole or in part, for non-commercial purposes as long as no changes are made and full attribution to this work is given. This work is licensed under the Creative Commons Attribution-NonCommercial-NoDerivatives 4.0 International License. To view a copy of this license, visit http://creativecommons.org/licenses/by-nc-nd/4.0/