Have you ever thought about building your own house? Not just selecting the finishes, assembling IKEA furniture, or maybe laying a bathroom tile or two. I mean really starting from scratch: removing soil, mixing concrete (by hand), tying steel rebar, laying blocks… Would it change the way you felt about the building? Now imagine doing this in the wake of immense tragedy while you are living in a temporary shelter. This is exactly what is being done in villages across Nepal. But how? And why? 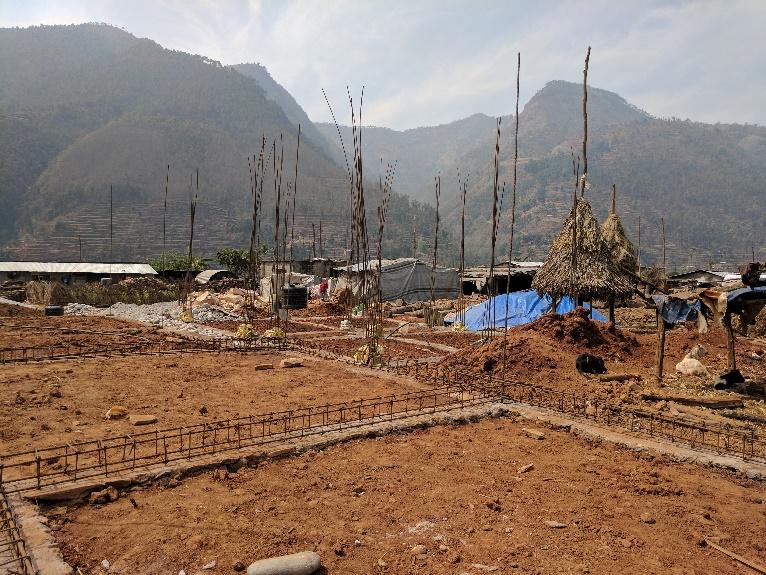 Scenes from a rural construction sites.

My interest in participating in the Impact Trek (aside from the once-in-a-lifetime chance to visit Nepal and to see the Himalayas, which had been a dream of mine for years) was to witness firsthand how local people were being empowered by Build Change to reconstruct their communities. As someone with both personal and professional interests in catastrophe risk and disaster management, it can be confusing when there are so many aid organizations that exist in the “resilience” or “safe housing” space – how can you know which ones are making a real difference in a community thousands of miles away? I had many questions and, admittedly, a healthy dose of skepticism before I left for Nepal: I was nervous that we would witness the plight of regions affected by disaster and then aided with rows and rows of donated houses built by external experts and left empty.

Five years ago I walked away from a university project in community and environmental development on the Eastern Cape of South Africa with an appreciation for the importance of engaging local communities in long-term change efforts, but I had little experience in housing. Through RMS I had learned that Build Change was “homeowner-driven.” In my initial understanding, this meant that the homeowners were somewhat involved in the decision-making process for the retrofitting or reconstruction of their home. I didn’t know just how involved they were, or how critical it would be to the success of Build Change. I looked forward to the trip but was still concerned on what we would see. 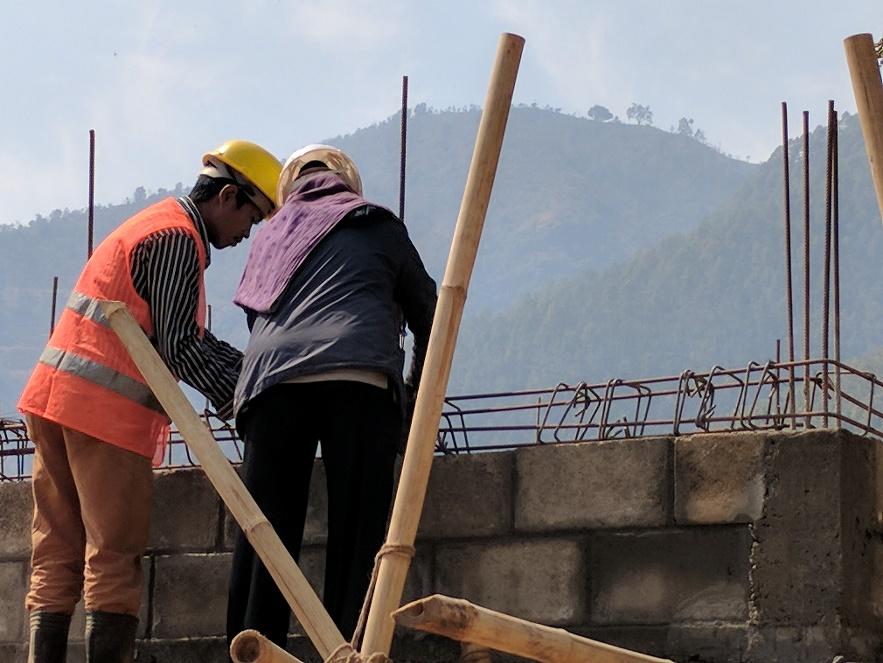 The use of locally available resources is important for construction materials, but also for the construction process! Bamboo was a popular material with which to build scaffolding.

Flash-forward a few months. The “light bulb” moment was when we were in Bhimtar village, at our second construction site for the day and the first that wasn’t a model home. I saw multiple generations of men and women working together to move soil, dig foundations, and fasten perfectly spaced steel ties to re-bar. An elderly man navigated a wheelbarrow full of stone across the construction site, deftly balancing the heavy load. Someone in the distance mixed a large pile of concrete with just a shovel. In the hot sun, three women in brightly colored skirts swung pickaxes into the earth and paused to glance curiously at our group. Two things were clear: that building houses without what we would consider modern construction equipment is really tough (obvious), and that I should go to the gym more often (obvious now). It was an impressive scene.

I asked Arun, our Build Change staffer guide for the day: “so, how is it decided who will receive the first new home?” He looked at me a bit funny, so I clarified. “In each village – as they reconstruct homes, who decides what family will get to live in each new structure?” As a New York City resident, I suppose I was picturing a housing lottery of some sort, where homes are built and then it is decided who will live in the first, then the next, and so on. Maybe there’s a town hall meeting. “They’re building their own homes,” he said. “The community will help to build, but this family – this is their house.” 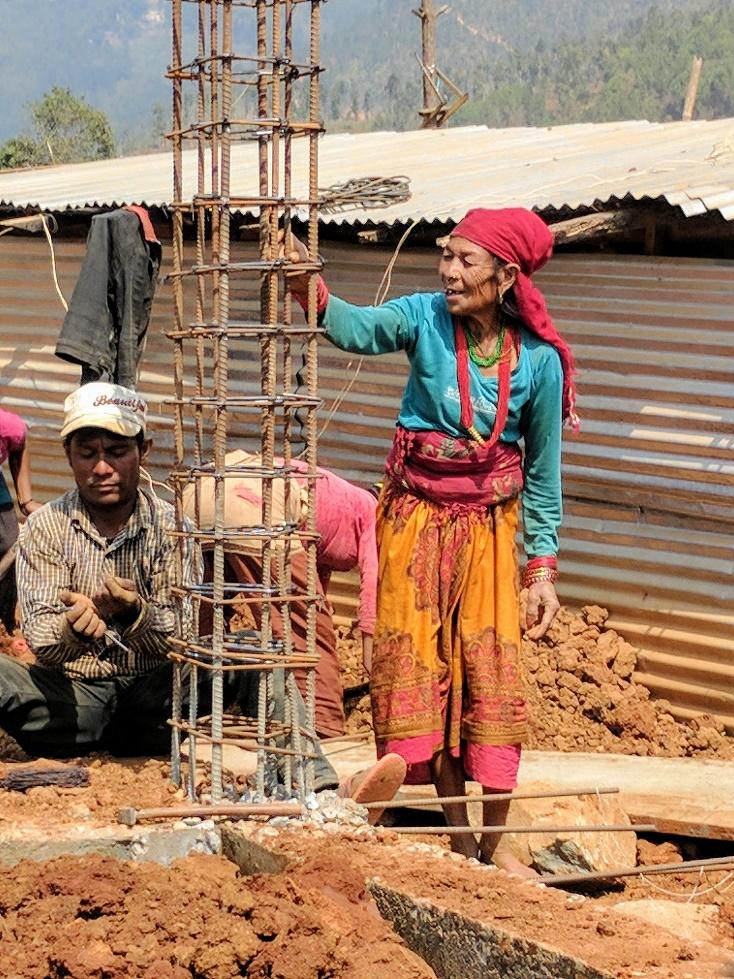 Women play an important role in construction efforts at all the sites we saw. Here a woman takes a break from breaking up soil for removal to check in on the progress of the rebar installation.

Noll Tufani, country director for Build Change in Nepal, puts it this way: “It means to give the opportunity to homeowners to take life decisions into their own hands, and to become responsible for reconstruction of their homes, not because they’re told to, but because they’ve thought it through, they’ve decided it was the best thing [for their family].”

Why is this important, and what are the outcomes?

Knowledge sharing and trust. With a government subsidy for funding and training from Build Change, the people in these villages are really building their own homes, from the ground up, together with their families. This means that Build Change is not just providing an asset. Instead, they involve the community by training builders so that the homeowner can rely on someone locally to help them construct a safe house – then not only is there the obvious outcome of an earthquake-resistant home, but now there is a community that has done this once and therefore should be able to do it again. Down the road, should another disaster strike, they’ll be able to rebuild. Or, the same homeowner and builder could decide to expand the house to meet a family’s growing needs in a way that is safe. By enabling local people, the knowledge stays in the area and can continue to grow and spread.

Cultural sensitivity. The type of house is critically important to the various cultures and ethnic groups within the diverse country of Nepal. We heard over and over again that Build Change wants to adhere the designs to the local practices, such as designing homes that fit the need of grain storage on the upper floor, as much as possible. Houses need to be culturally appropriate: if everyone in the village has a wood house, and we start building reinforced concrete – it doesn’t matter how much “better” or safer we say the house is. It doesn’t fit in, it’s not respectful of local culture, and it might not be trusted by local people. Noel told us that they’ve seen examples of culturally inappropriate houses used as animal sheds. A new house is not any safer if it’s empty. 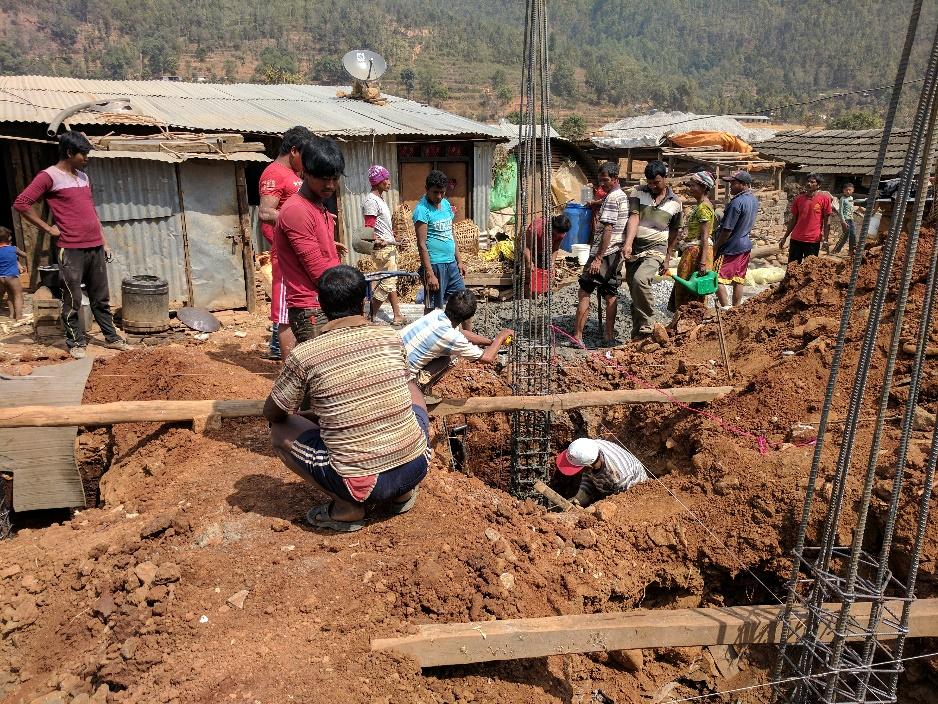 The construction we observed was a community effort, and though sometimes the sites did seem to get a bit crowded, everyone played a part. Here, the men gathered have formed an assembly line to bring water to the foundation for it to be mixed with cement.

Empowerment. This is a decision the homeowners have to balance against a lot of other day-to-day priorities: these are often people on the lower end of the economic spectrum in their respective region and so they may have to weigh things like healthcare, or transportation, or any other need. But they’ve made the decision together with their family and they have come to agree that the best use of money is to invest it in a safe house. Therefore, the family becomes very committed to the result – the involvement from the start means that people understand why they are doing or checking for certain qualities, they make sure they’re doing it correctly, and then they can enable to entire community to replicate it. If a program doesn’t start with the homeowner, they may only leave behind a house instead of a fully engaged and educated community.

After realizing why being homeowner-driven is so important to reconstruction efforts, I can’t imagine the impact of what it is like for the people here to build their own homes, to make the difficult decision to spend a critical amount of money and take family safety into their own hands. I can only venture that I would feel empowered and strong, maybe nervous, but certainly resilient. Looking back, I wish I had asked Arun to ask them what this feels like.

I hope that I can use my experience to tell others about the importance of Build Change and what’s happening in Nepal. The takeaway for me is that Build Change is enabling the people we saw not just with houses, but with homes. Homes that can be replicated across villages, in a way that makes sense for the people who live there. Homes that village residents feel responsible for and that they feel comfortable in. Homes that will help them to regain their livelihoods and live safely for generations to come. That’s so much more than just a house.

This work may be cited as follows: The Build Change Guide to Resilient Housing: An Essential Handbook for Governments and Practitioners. Denver, CO: Build Change, 2021.

Build Change encourages dissemination of its knowledge, this work may therefore be reproduced, in whole or in part, for non-commercial purposes as long as no changes are made and full attribution to this work is given. This work is licensed under the Creative Commons Attribution-NonCommercial-NoDerivatives 4.0 International License. To view a copy of this license, visit http://creativecommons.org/licenses/by-nc-nd/4.0/